How do woodpeckers learn to slam their faces into trees?

Last week I got an email from a good friend of mine named Scott. He writes about seeing:

a little woodpecker doing what it does, hammering at a small tree. We mused about whether woodpeckers hammer out of nature or nurture, or trained nature. The question on the table was: if a woodpecker were raised by chickadees and never saw another woodpecker, would it still instinctively hammer?”

That is a great question with a complicated answer. Baby woodpeckers hatch in an earlier stage of development than chickadees or most other birds, with no down feathers at all. Their parents spend all day gorging themselves on whatever insects they can find and then returning to the nest to feed the babies by regurgitation. During my time as a rehabber, I raised two baby flickers and one baby Pileated. The flickers were fairly feathered out nestlings when I got them—their tree had broken right at the cavity in a storm. The parents were still returning and caring for the nestlings but then a crow discovered the open nest and carried off at least one nestling. As it was returning to take another, the people who lived there climbed a ladder, pulled out the surviving nestlings, and brought them to me. The baby Pileated I raised had apparently just fledged when it was hit by a car in Two Harbors—this may have been its maiden voyage. Its wing was sprained but there were no breaks.

Both flickers and pileateds specialize on ants as well as on insects hidden under the bark of trees. It would be inefficient to carry ants via their beaks—they’d have to make an awful lot of separate trips to the nest from a good anthill, so instead, the parents swallow all the ants they can on a single trip and then feed the nestlings via regurgitation. There was no way I could obtain the precise mixture of natural food in the huge quantities their parents could feed them, so I substituted a mixture of mashed mealworms and a commercial powdered hand-feeding mix. I added enough water to make it the consistency of pancake batter and fed it via an eyedropper. They guzzled it down from the time I got the birds until they were independent. 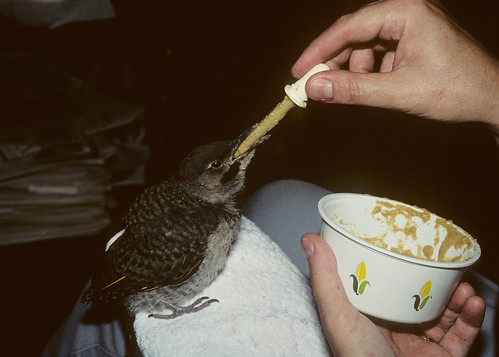 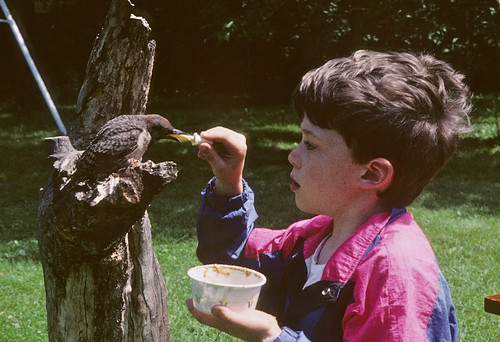 I’ve watched woodpeckers of other species, less dependent on ants, at a few nests, most especially the Red-bellied Woodpeckers that nested in my boxelder in 2016. I have photos of adults carrying insects in their beak on June 17, a full 22 days before I got a photo of a well-feathered nestling sticking its head out of the nest, so those chicks must not be fed by regurgitation.

I’ve not personally watched Downy Woodpeckers feeding their young, but two photos in my book, Into the Nest: Intimate Views of the Courting, Parenting, and Family Lives of Familiar Birds, showing the inside of a Downy Woodpecker nest, show the mother bringing beakfuls of insects and spiders to the nestlings.  I don’t know at what stage baby woodpeckers in general start paying attention to what their food looks like.

Baby woodpeckers stay with their parents for several weeks after fledging. During the first days and even weeks, they follow their parents closely. I’ve had lots of opportunities to watch adults of several species with their young, and the interactions are charming. Once I spent a half hour watching a father Pileated and his daughter. He was pecking into a tree right next to her, seemingly showing her the right places to dig. I watched her dig out and swallow a few big bugs all by herself, but several times even after a few successes, she got impatient and started begging. Her father patiently fed her even as he seemed to make sure she was watching him dig out more. And each time after feeding her, he moved a foot or two away from her, as if encouraging her to dig out her own insects in the tree bark.

This is how parents educate their young even as they continue to provide everything the chicks need. That is exactly why only qualified people should ever raise baby birds—when people don’t understand this critical process, their impulse is simply to let the babies go when they can fly by themselves. We obviously cannot teach them everything their parents can, but if we’re expecting them to pick up their knowledge on the street—where they can find their own food, what signals should they pay attention to when predators are near, where they should hide out during storms or when a predator is about, and probably little things we mere humans cannot imagine—we still must provide food as they figure all that out for themselves.

When I raised the flickers, I could show them some of the anthills in my neighborhood, but it took them a long time to figure out other ways of getting food, so they were still coming back to me and my sons for feedings well over a month after natural flickers, properly educated by their parents, were fully independent. 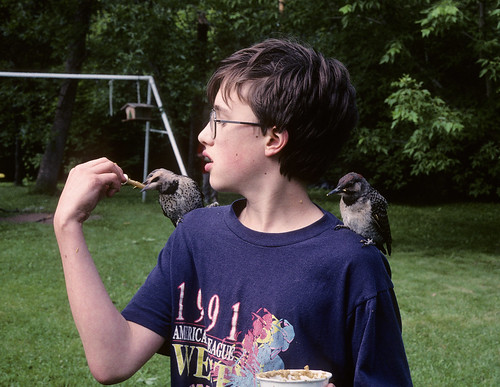 By October, my flickers were taking less and less food from us, and they disappeared by the end of the month. I know for a fact that at least one of them survived the winter, because when my son was doing his paper route the next spring and a flicker called, he whistled and it alighted on him.

Woodpeckers have such exquisite hearing that they hear where insects are in the trees and learn how to slam their sturdy beaks right where they'll be able to get them. Wild woodpeckers get to study how their parents do this, and that studiousness itself is instinctive. But I know that the Pileated I raised figured out the tree-slamming stuff without my demonstrations. I was better at taking him to anthills—he could slurp up ants to his stomach’s content with fairly little effort, at least for a day or two before he’d decimated that ant population.

So even though there is no record of a chickadee rearing a baby woodpecker, we know that they do work out how to slam their faces into trees to get out food—I imagine they also watch their parents excavating holes, though I can’t be certain about that. It's all so interesting, and the more we learn, the more we realize how much we still don't know. 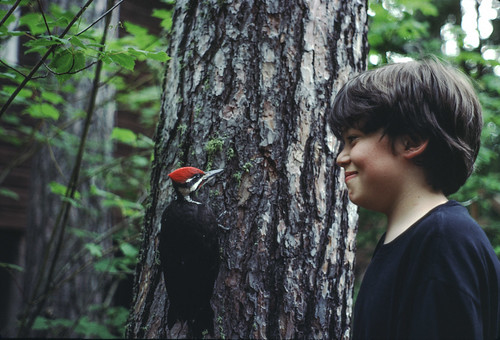