A Conversation with Rosemary Mosco: Part 1 Today is the first day of National Pigeon Awareness Week. It’s not an official designation except in my world, but it’s timely—pigeons saved the lives of countless American soldiers in WWI and WWII as part of the Army Signal Corps Pigeon Company, and as the only avian species to produce actual veterans, they deserve to be celebrated around Veterans Day.

Even more important, an extraordinary book about pigeons, written and illustrated by naturalist and science writer Rosemary Mosco, has just been published. Mosco is the creator of the wildly fun and smart Bird and Moon cartoon series, and her unique and whimsical style and engaging sense of humor shine through this new book, A Pocket Guide to Pigeon Watching: Getting to Know the World’s Most Misunderstood Bird. 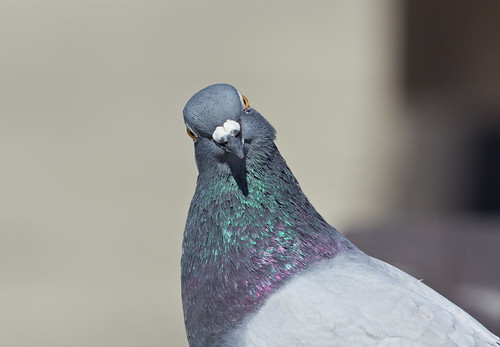 Our familiar Rock Pigeon isn’t native to America but was brought here by some of the first European settlers and quickly became firmly established in towns, cities, and farms. The House Sparrow and pigeon were the first two bird species I learned in my Chicago neighborhood as a very small child. I loved watching how pigeons walk, stretching their necks so their eyes and ears can check out a scene before the rest of the body takes the risk and catches up. I loved listening to their powerful wings clapping on takeoff. And I loved how they flew high in the sky, holding their wings in a deep V as they drew my eyes to heaven, where I knew my grandmother was.

Because I love them, I’ve read a lot about the world’s pigeons and doves. But last summer I rolled my eyes a bit when I opened an email asking me to review A Pocket Guide to Pigeon Watching, at least for the split second before I saw Rosemary Mosco’s name. That intrigued me, so I said I was interested in seeing the book. I expected it to be lighthearted and fun like Mosco’s other work. But I didn’t expect the book to be thorough and meaty as well—the perfect package. Rosemary and I met a couple of years ago when we were both speakers at a birding festival sponsored by Maine Audubon and LL Bean. I sat in on a workshop she did with families, and I was as charmed by her warmth and accessibility as I was wowed by the substance of her presentation.

I decided to talk to Rosemary about this new book about pigeons. Our conversation took place over the summer, but I’m slowing down in my dotage, so it’s taken till now for me to finally put these programs together.  I asked Rosemary why she thinks people should watch pigeons.

I think one of the big reasons that people should watch pigeons is that they’re all over the place, which sounds like a no brainer, but there are so many really interesting birds that only cross our paths for brief times of the year or if we go to a certain really unusual location, which I have definitely done. You know people will drive hundreds of miles to see a particular bird. But pigeons are right here. And so you can practice a lot of your observational skills with pigeons, and they reward you because they are so interesting to watch. So I guess that’s reason #2, that they’re really, really interesting. Their behavior is really strange and really really amusing. I mean they kiss, they make that clapping sound, either to warn other pigeons that there’s danger or somebody else will do it as a post-copulatory display for reasons we don’t really understand.

They’re also safe to watch. I’ve gone looking for creatures in swamps a lot and gotten all sorts of pests. With pigeons, you just walk down the street and get to watch them. These are probably my top reasons for watching pigeons.

I particularly love Rosemary’s final reason for watching pigeons: “It’s a hard world. Sometimes you just need to look at a soft bird.”

Right. Sometimes we just need to look at a soft bird. Yeah.

Sesame Street really knew what it was doing. There’s Bert and Ernie, these two guys who live in a basement apartment on Sesame Street, and Bert loves pigeons. Really unquestioningly loves them. And I feel like Sesame Street was doing that because a lot of kids live in cities, and so were learning an appreciation for the nature around them. I think that was my first exposure to a positive impression of pigeons of which there are not a lot.

I asked Rosemary what made her fall in love with pigeons in the first place.

It’s so hard to say because I’ve liked them forever. I think it’s because I grew up in cities and my dad grew up super poor in a tenement on the lower east side of Manhattan and he tells us all sorts of stories from that time. But one thing he told me is that he knew two kinds of birds. There were the little brown ones, which I’m sure you can guess were House Sparrows, and there were the big gray ones, and those were the pigeons. And so even then he was noticing these birds that were in close proximity to him so I think they’ve just always been around and if you just start paying attention to them you can’t help but fall in love with all of their amazing behaviors and patterns.

This blog post is a transcript of today's podcast, which you can listen to here.  Rosemary Mosco's newly released A Pocket Guide to Pigeon Watching: Getting to Know the World’s Most Misunderstood Bird is simply wonderful: the publisher's blurb is spot on saying it's "part field guide, part history, part ornithology primer, and altogether fun." For tomorrow's blog, Rosemary Mosco will explain why pigeons are doves, why they’re dinosaurs, and why they’re puppies. Yep, according to Rosemary Mosco, pigeons are puppies. 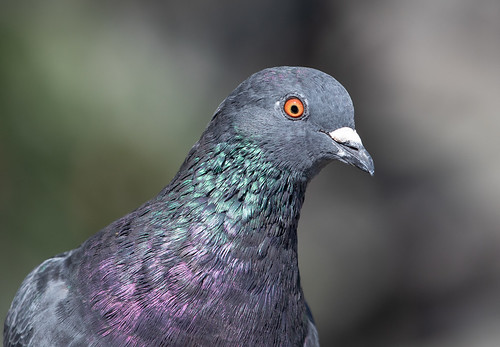