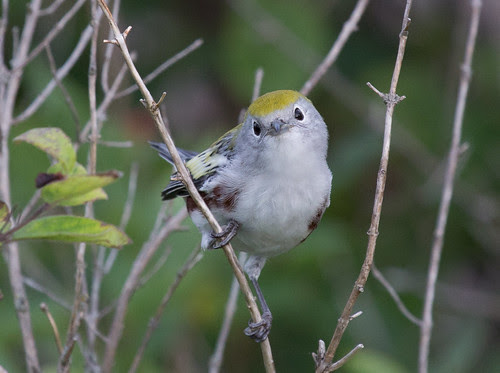 Transcript of For the Birds for September 9, 2011.

Of all the warblers I treasure, the one that has been by far the most cooperative for photography is the Chestnut-sided Warbler. I’ve managed to get pictures of these splendid birds singing, 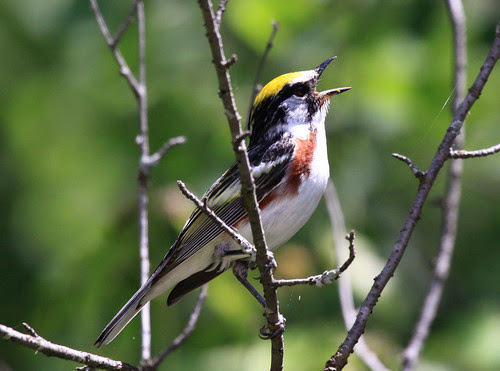 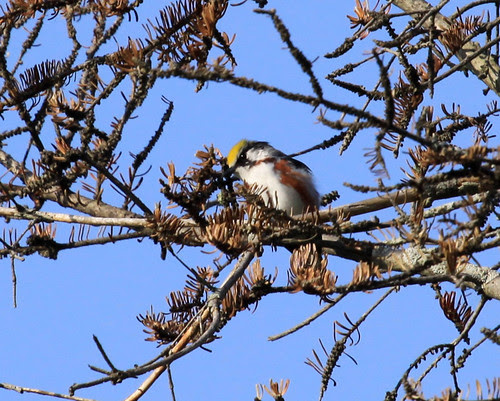 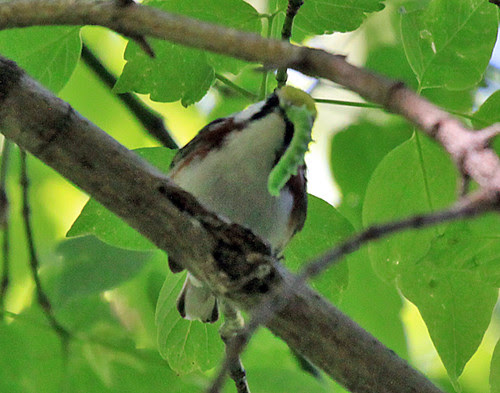 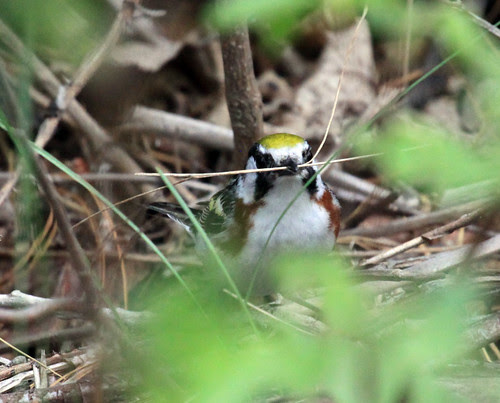 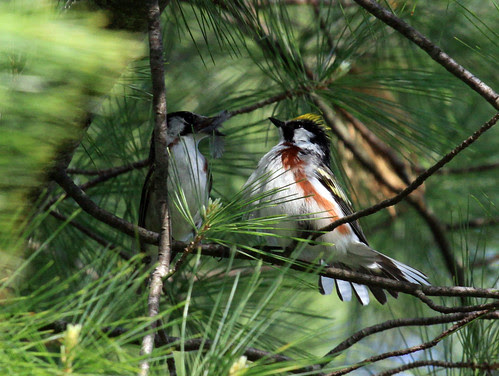 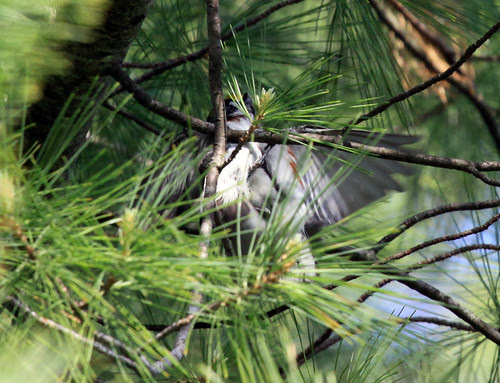 I even have photos of a Chestnut-sided Warbler at my bird feeder during a rainstorm. 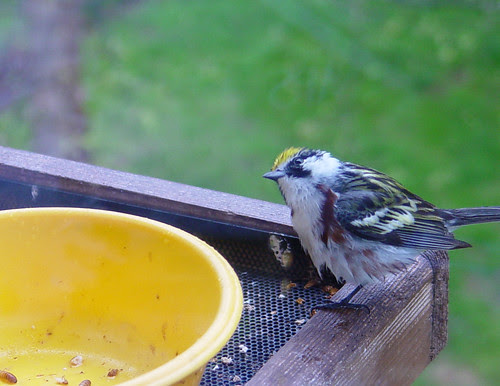 Some birders find fall warblers bewildering. The majority are young birds just hatched that summer, and the adults have molted out of their breeding finery. But Chestnut-sided Warblers are marked with a unique lush tropical greenish-yellow on their crown and back. They also have a pure white underside and white eye rings, making them easy to identify whether or not they bear chestnut sides. 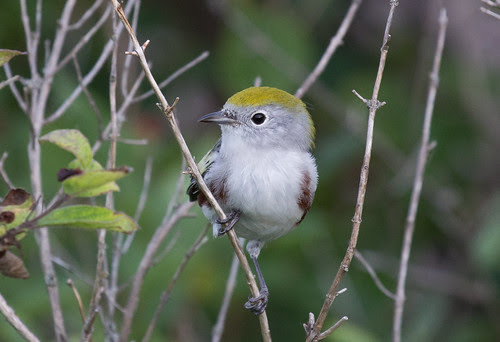 I spent several minutes with one up at Hawk Ridge last week. I snapped photos of him from every angle while he snapped up insects from every direction. This time of year, warblers pig out in late afternoon and early evening, bulking up before their nocturnal migration, and this little warbler has a long way to travel. Chestnut-sides winter mainly in Central America, some staying as far north as Belize and Mexico and a few straying down to Colombia and Brazil. Optimistic birders in the South may find it worthwhile to check out every little bird they see, because over the years a handful have been spotted in winter in Florida, Arizona, and California. 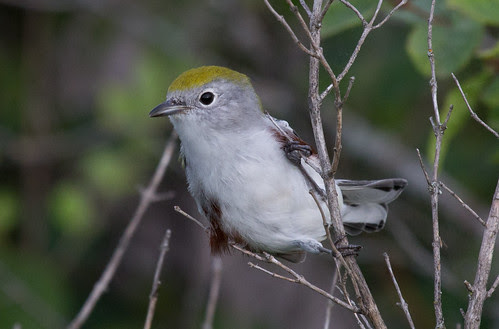 Chestnut-sided Warblers are one of the rare Neotropical migrants who are doing better nowadays than they did before European settlement in the Americas, because they nest in newly regenerating forests after clearing by fire or cutting. John James Audubon apparently saw only one during all his time studying the birds of America, but as the eastern forest was cut and then regenerated, Chestnut-sided Warbler numbers expanded greatly during the 1800s and first half of the 20th century. They’re declining a little now, but remain one of the most abundant warblers in many northern Minnesota and Wisconsin forests. 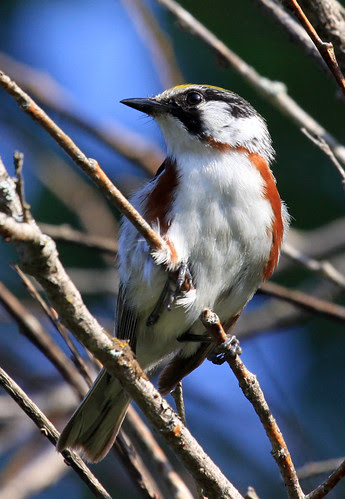 Males have two different song types. The first is remembered with the mnemonic “pleased, pleased, pleased ta meetcha!” This is called the accented song. It’s learned by young males watching their father or another nearby male singing. This song is essential for attracting a mate. The complex unaccented song is essential for defending a territory against other males. This song is learned from the father and neighboring males during the bird’s first summer, but is refined over the years as the bird interacts with other males. Some Chestnut-sides learn only the second song, and aren’t effective at attracting a mate. 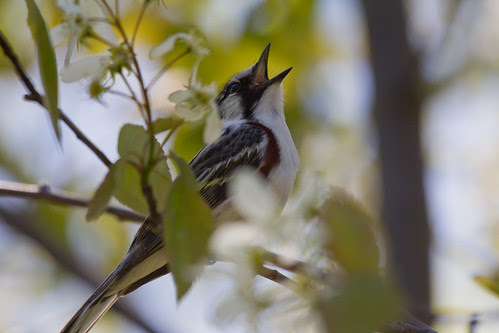 Males respond extremely quickly when someone plays a recording of their song. This can distract them from more important activities and put them in a vulnerable position if predators are nearby, so calling in Chestnut-sided Warblers should be done only for strongly justifiable reasons. 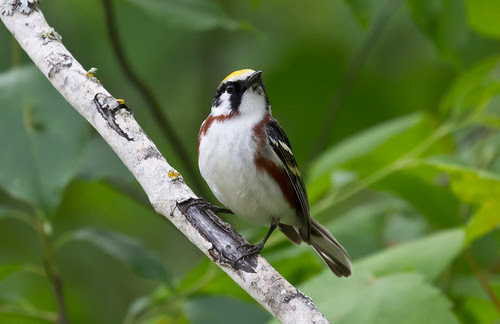