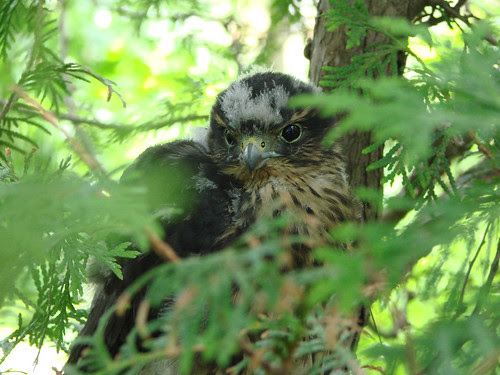 (Transcript of today's For the Birds. If you listen very carefully, you may hear Archimedes calling in the background a few times)

One of the gentlest of all birds is also one of the fiercest. To watch a Merlin feed its tiny nestlings is a lesson in tender solicitousness, until your eyes fall on the songbird being ripped apart to so gently feed those hungry nestlings. Watching Merlins in their day-to-day lives, you can’t help but wonder how they managed to catch those birds in the first place. Merlins make a sound like hyperactive Killdeer. They’re so loud that you’d think they’d warn away every bird within a half-mile radius. Whenever people call asking me to identify a hawk nesting in their neighborhood, I ask if it’s noisy. If the answer is yes, their birds are Merlins. 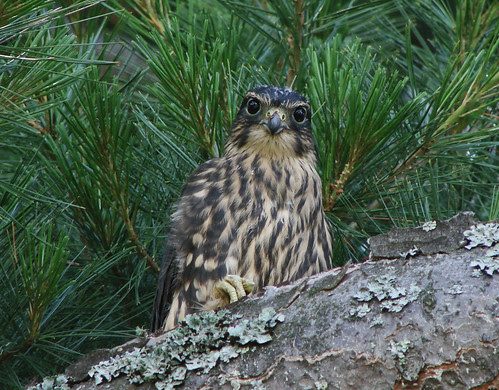 Merlins took a major hit during the DDT era, but as their numbers rebounded in the 1980s, they were helped by Duluth’s crow population explosion. Every spring, Merlins take over nests crows had built the previous spring. The abundance of potential nest sites and the wealth of songbirds to serve as meals made Duluth attractive to them, and so our city was one of the first Midwestern cities to support good numbers of nesting Merlins. 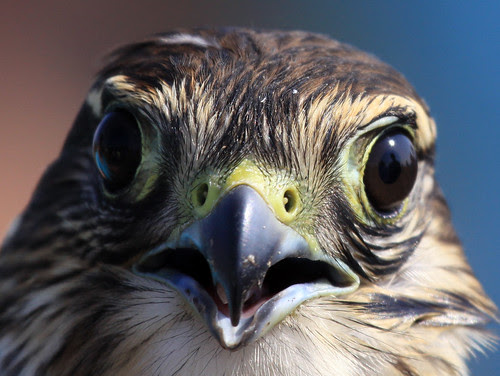 When I moved to Duluth in 1981, Merlins not only didn’t nest here yet—they were so rarely seen at Hawk Ridge during migration that appearances made the birding hotlines. Merlins were among the most exciting birds to see there for another reason, too. We keep an owl decoy set up at the Main Overlook because once in a while a hawk notices it and dive-bombs it once or twice, giving people a longer, more exciting look. This instinctive behavior probably helps vigilant hawks drive away Great Horned Owls so the owls won’t notice where the hawks go to roost at night. It doesn’t take long for most hawks to figure out the owl is fake and to fly off. But some Merlins keep swooping on the decoy with growing intensity for several minutes. It’s hard to understand why, but I like to think that they get even angrier when they realize the decoy tricked them. 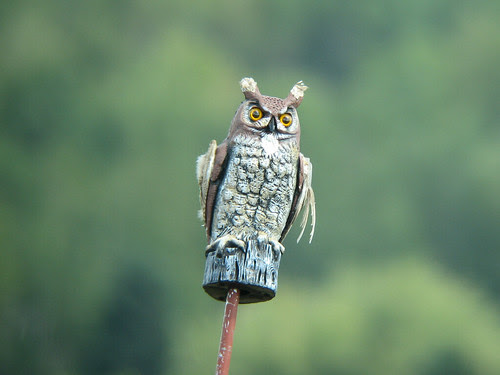 Despite their noise, Merlins are extraordinarily effective hunters on small songbirds. When a pair nested down my block, once every day or two one would grab a small bird from my feeding station. The Merlin would approach from the front of my house, dropping to just inches above the sidewalk before veering left toward the feeders. This route kept it completely hidden by our hedge until literally the last second, when it wheeled in and grabbed a bird. After witnessing this a few times, I closed up my feeding station for the duration. I don’t begrudge Merlins their meals, but figured it was as unfair for me to be baiting birds for them as it would be for a hunter to bait deer or bears. 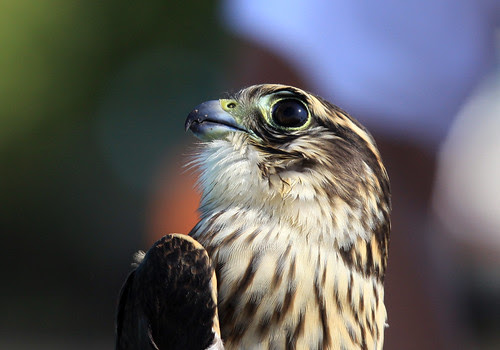 Merlins may be small, but they’re quick and courageous and can manage surprisingly large prey for their size. In Medieval Europe, they were popular “ladies’ hawks,” used for falconry by such notables as Catherine the Great and Mary Queen of Scots, particularly to chase down Skylarks. The word Merlin is derived from the Old French word esmerillon, which was coined specifically for this bird—etymologically, it’s unrelated to the name of the fictional wizard associated with King Arthur. At a time when many of my most beloved birds are declining, it’s cheering to know this bird of two continents, steeped in ancient traditions and modern birding, is thriving. 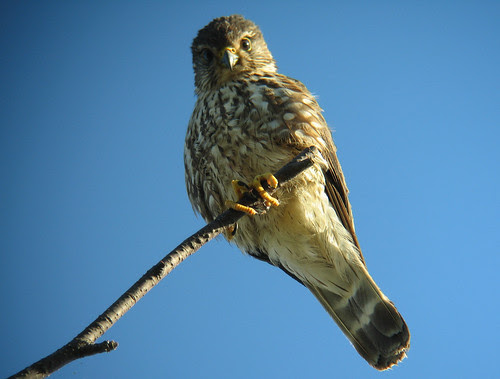