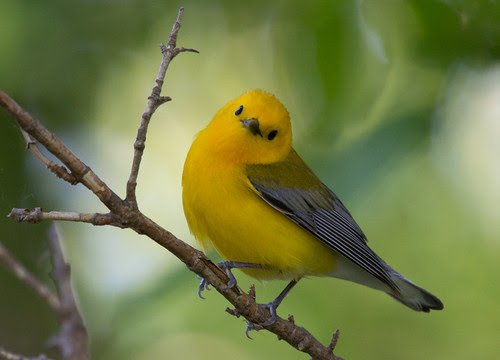 Every winter, gardeners pull out seed catalogs to dream of the possibilities the coming season might hold. I’ve always used my field guides for that. When I started birding, the pages of my Golden Guide were filled with an array of improbably exquisite and comical and funky birds that I couldn’t imagine existed in the real world, much less right in the Chicago area where I grew up. One of the birds I instantly focused on as a most-yearned-for species was the Prothonotary Warbler--a lovely Southeastern bird with intensely golden-yellow head, neck, and breast, offset to perfection by bluish-gray wings and snow-white lower belly and undertail coverts. This bird seemed too striking for me to have overlooked it my whole life, yet when I learned to pay attention to the world around me, I found a Prothonotary Warbler singing away at the edge of a Jewel-Osco supermarket parking lot bordering one of the creeks in an industrial Chicago suburb.

Of course, these glowing creatures are more typically found in wilder river bottomlands and swamps, but when a friend of mine placed a decorative copper teakettle on his cabin door in La Crosse, Wisconsin, a pair of Prothonotary Warblers successfully raised five or six chicks in the tiny decoration for at least a few years in a row. 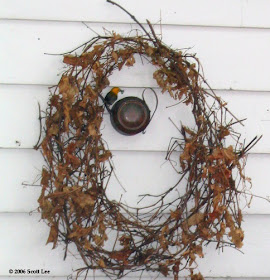 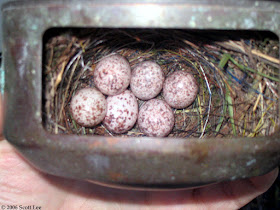 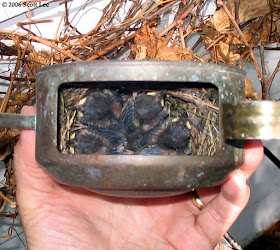 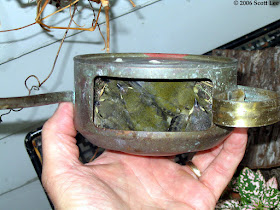 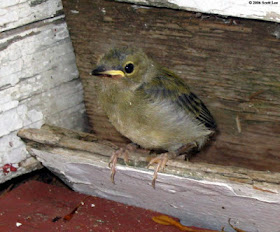 Predation is the main way that Prothonotary Warblers lose their chicks--this nest would be hard for snakes to access, and most other nest predators are reluctant to come so close to human habitation.

Of all the places I’ve seen Prothonotary Warblers over the years, the place where they are the most conspicuous to see and photograph is along the Magee Marsh Boardwalk, at the Magee Marsh Wildlife Area, managed by the Ohio DNR. In the two springs I’ve spent time at the birding festival called the Biggest Week in American Birding, I’ve seen these golden warblers singing, feeding, inspecting possible nest sites, and actually nesting in conspicuous places, often at eye level. Birders fill the boardwalk constantly from sunrise until sunset every day in May, and the birds seem to consider us an innocuous presence to be ignored, coming so close that I saw people taking full-frame photos using inexpensive small digital cameras and cell phones. 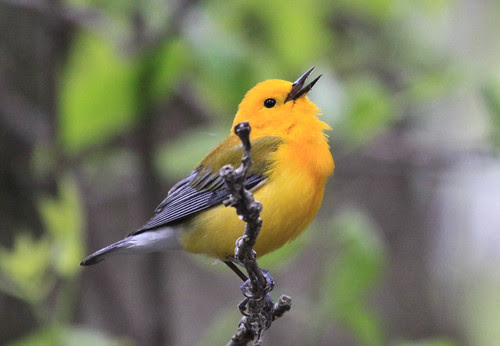 Prothonotary Warblers are the only eastern warblers to nest inside tree cavities and other hidden spaces. At Magee Marsh, they squabble over nest boxes with Tree Swallows and House Wrens. They also use cavities excavated by Downy Woodpeckers, and the cavities left in trees after limbs fall. When we take the time to watch them, we can see them inspecting all kinds of crevices and dark holes. I’m sure their beautifully large eyes make exploring these dark places easier. 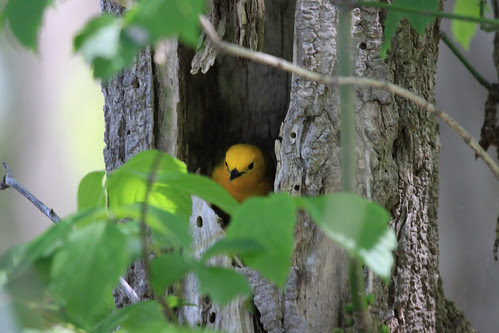 The name “Prothonotary” seemed mysterious and magical to me as a young birder. One of my books said it was given to the species because high papal officials called prothonotaries in the Roman Catholic Church wore lemon yellow ecclesiastical garb, but I’ve researched the vestments of Church officials and can’t find any reference to prothonotaries ever wearing yellow except in accounts of how Prothonotary Warblers were named. Some government clerks in some states such as Pennsylvania and in English courts of law are also called prothonotaries, but again, so far I can’t find any reference to them wearing lemon-yellow garments, either. It doesn’t matter--that which we call a Prothonotary Warbler by any other name would be as sweet. Indeed, the species’ song affirms this--it’s quite justifiably transcribed as “Sweet, sweet, sweet, sweet, sweet.”
Laura Erickson at 10:51 AM
Share