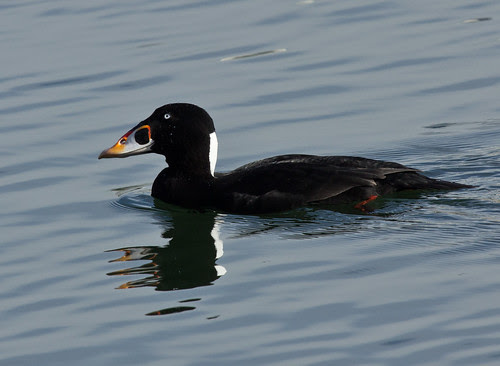 Of all the ducks cataloged in my first field guide, the one I was most fascinated by was the Surf Scoter. This sea duck has the most improbably colored and amazingly oversized bill, contributing to its many nicknames, including Goggle-nose, Horse-head Coot, Plaster-bill, Snuff-taker, Blossom-billed Coot, Bottle-nosed Diver, and Mussel Bill. Its most common nickname is the “skunk-headed coot,” though really, the conspicuous white area on the back of the head seems far less interesting than the humongous black, white, orange, red, and yellow bill on adult males. The bulbous bill seems to hold prey well, but can hardly be essential for survival because it’s much smaller on young birds and adult females. Both sexes and all ages join together in winter in large feeding flocks, all dining on the same prey. Females may use the males’ funky bills as a signal of good health and nutrition to help them choose the fittest potential mates.

Whatever the true function of the male’s bill, it sure is cool to see close up. Most of the Surf Scoters I’ve seen over the years have been off in the distance, and my best views have all been through a spotting scope until just this week. Russ had a meeting in Long Beach, California, and I tagged along to see what birds I could find. We’re staying onboard the Queen Mary, which is permanently docked in Long Beach. I spotted Surf Scoters from our room’s portholes, and  they’ve been surprisingly easy to watch at fairly close range everywhere along the water. A lot of litter floats in the water, auto and boat traffic are noisy, and dozens of feral cats lurk along the water, so there isn’t as much bird activity as I’d like, but the Surf Scoters seem to take it all in stride, despite the fact that they breed all the way up in the Canadian and Alaskan wilderness. Many first year birds don’t return to the far north for a year, remaining along the southern California and Baja California coast in the West, or along the mid-Atlantic in the East, so they apparently figure out how to deal with disturbance. At least for the most part. But Surf Scoters have declined in numbers rather dramatically. Their population is thought to have decreased from 50–70 percent in the past 40 years. In 2007, a huge oil spill in San Francisco Bay oiled and killed thousands of birds. About 40 percent of the 1,000 retrieved live birds and 25% of the 1,365 retrieved dead birds were Surf Scoters. Since most of them were healthy adults, scientists were concerned that these losses could contribute more to the species’ decline. 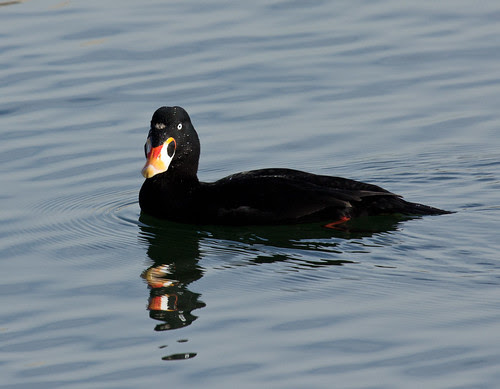 Right here in Southern California, it’s easy to forget about Surf Scoters declining because they’re everywhere. And on a day when I’ve gotten nicer photos than I ever dreamed possible, I want to think only about how much richer the world is for having this splendid duck on it.
Laura Erickson at 9:24 PM
Share