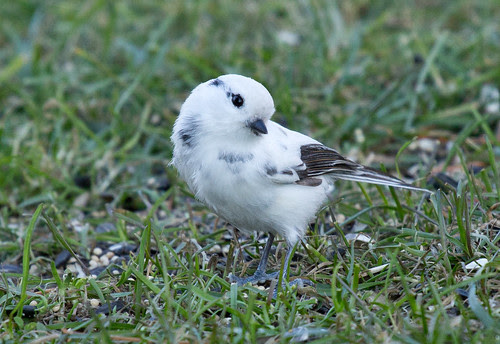 Last week I got an email from a nice woman named Lisa just south of Duluth. She’s had an almost all-white chickadee visiting her feeder for a while, so I drove down to see it.
Birds that have areas of pure white along with at least some areas of normal-colored plumage used to be called “partial albinos.” I like that term, because these birds are entirely different from those who have what used to be called “dilute” plumage. I learned to use the term “leucistic” for paler than normal birds, but nowadays most people refer to any bird with abnormal white or pale plumage, whether it’s in the form of white patches or all-over pale plumage, as “leucistic.”

I’ve only seen a handful of leucistic chickadees in my many years of birding, and this was the whitest one I’ve ever seen, though here and there it had little bits of dark and had a normal-colored bill. I wasn’t absolutely certain, but the eyes appeared to be normal, too. That’s a good thing, because eye pigments protect the retina from ultraviolet light. Without eye pigment protection, birds are subject to premature blindness. 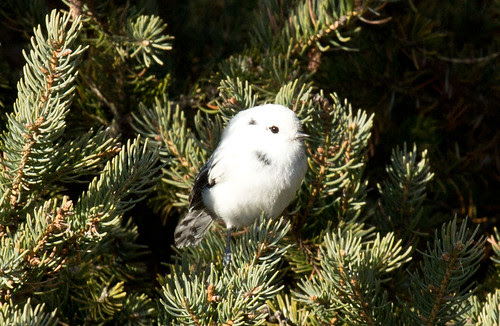 White feathers may have some disadvantages in winter, if they’re flimsier without the added structural strength that pigments provide. Many mostly white bird species have black wingtips, the melanin making the feathers stronger exactly where they most need that structural strength. If pigments help feather barbs and barbules endure and hold together better, that may give an edge to normally colored chickadees in winter and any time when it’s raining.

Chickadee flocks have a hierarchical structure, birds choosing their mates across the hierarchical ladder. Their ranking corresponds to the amount of ultraviolet reflectance in the bib and cap. This leucistic bird may be lacking that, which would put its rank at the bottom of its flock, but it’s clearly been accepted into a flock, and if there are as many birds of the opposite sex in the flock, this one may well find a mate.

I just happen to be reading Moby Dick right now. There’s an internet site providing a daily chapter (Moby Dick Big Read), and I’m reading along as I listen. I just happened to listen to the chapter called “The Whiteness of the Whale” this week. Herman Melville found all kinds of fascinating cultural references to the color white, and expounded on the many ways we deify or demonize unusually white animals and people. To me this little chickadee, flying in with the flock and zipping back and forth from the feeder to a branch where it fed, seemed like any other chickadee in essentials. It was cool to see and photograph it. When the other chickadees flew in, I found them endearing, too, but my eyes kept being pulled toward the white one.

It’s a human quality, quite possibly one we share with other animals, to take interest in the particular. When I’ve fed chickadees out of my hand, I took a lot of pleasure in recognizing individuals. That’s the special thing about an outlier. You can look at and enjoy every one of your chickadees, but when one just pops out so easily, it’s really exciting. Of course, it’s also a mercy that most chickadees look pretty much the same. When one stands out, we can’t help but notice if it stops coming, and we get more invested in its survival. That’s rather the opposite of Moby Dick, where the white whale’s paleness is what kept the poor thing in a very ugly spotlight. One never knows quite what to expect in the natural world, but I think it’s safe to say that Lisa’s great white chickadee won’t be encountering any harpoons in the foreseeable future. 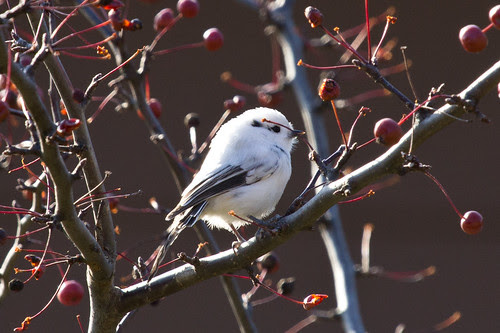