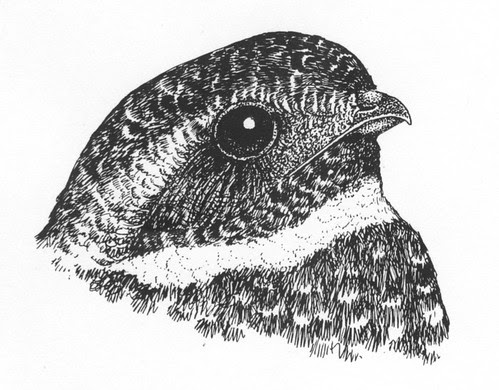 One of my favorite birds of all is the Common Nighthawk. I was taking a field ornithology class in the summer of 1975, and birding on my own every moment when I wasn’t in class, and had read about this wonderful bird. That day, our instructor described nighthawks—how they dart and weave in the sky, chasing flying insects with a flight pattern that matched in erraticness the flight patterns of its prey, their nasal peent calls and deep booming sounds, and their habit of nesting on rocky bare ground or on rock-ballasted flat roofs.

That evening, Russ had to do some work in his lab at the Natural Resources Building at Michigan State University. I often tagged along to keep him company when he worked at night, but when we got to the parking lot and I saw the nighthawks, I was rooted to the spot. He went in and I parked myself right there, sitting on one of those parking space cement thingies for an hour or two, utterly mesmerized. The gracefully erratic flight was made even more beautiful because the white patches near the wingtips looked like crescent moons.

One male persistently boomed nearby. I found that fascinating. The booming sound serves territorial and mate-attraction functions, but to me it looked like he was diving straight for the ground at high speed, realizing at the very last moment that he was going to crash and making a booming gasp as he righted himself just before bottoming out on asphalt. One time he plummeted down just two or three feet from my face, the wind reaching my bare legs as I watched, frozen in amazement.

This was one of the seminal experiences my first year of birding. I’d been at Michigan State for over three years at that point and had never noticed this, not even once, until this night, after I’d read about nighthawks and learned more about them that very day in ornithology. I had started birding just 3 ½ months before, and had already seen such amazing sights as Scarlet Tanagers, Blackburnian Warblers, and Great Blue Herons—birds that had been in my world my entire life, but I’d never once noticed until the scales were removed from my eyes and ears by becoming a birder. When I was little, I’d once seen a dead Baltimore Oriole in my yard, the morning after the DDT truck drove by. But I never once had seen or heard a living one in my neighborhood, despite the elm trees in my yard. How much more was “out there” that I’d just never noticed until I cracked open a field guide and started looking?

Lat night I recounted my beautiful nighthawk memory to Russ. It jogged his memory of his own seminal experience in the Natural Resources Building parking lot. One night when I had not accompanied him when he had to work until almost midnight, he went out to the car and it wouldn’t start—the engine was deader than a doornail. He went inside and searched out one of the janitors who went out with him to jump the battery. Russ opened the hood and .... the battery was gone. Poof! Vanished! It would never in a million years have occurred to us that someone would steal the battery right out of our car. The janitor drove him home and next day we had to scrape up money for a new battery. Russ told our children this story when they were learning how to drive, explaining why cars nowadays have a hood release inside the car, so people can’t just open it and steal the battery.

So there you have it. Two different people’s memories taking place in the exact same place at the same time in our lives. My nighthawk memory is of course a lot pleasanter. So this is my cautionary tale on why people should become birders—our memories are a lot happier than those of people who don’t.
Laura Erickson at 8:14 AM
Share