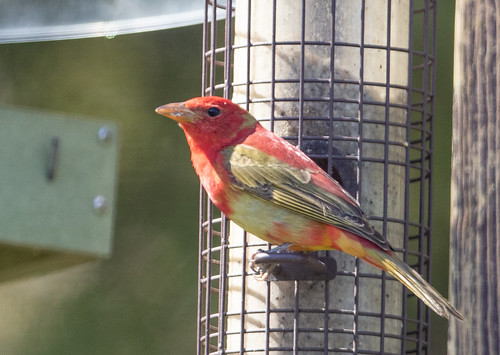 On Sunday, May 13, 2018, my friend Alison Clarke called me about an unusual bird at her feeder—a Summer Tanager. He’s what’s called a “first spring” bird, meaning he hatched last year. I couldn’t get away right away, but the bird was still visiting her birdbath and feeders a few hours later. I took plenty of pictures. He kept his distance, but the photos are diagnostic. 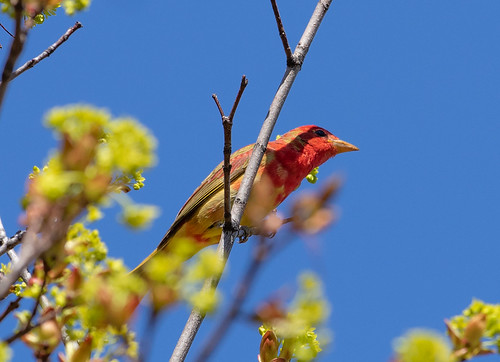 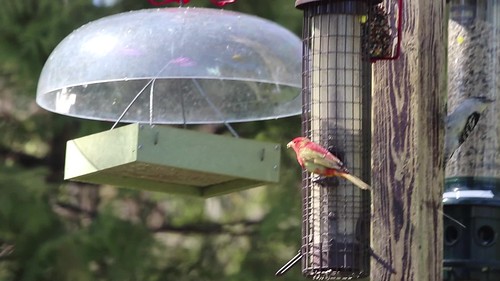 It’s easy to tell male from female tanagers by the males’ brilliant colors. And it’s easy to tell "first spring male" Summer Tanagers from adults, too. Instead of being bright rosy red all over, they’re red on the head, upper back, and breast, with the wings yellowish-olive and the rest of the body covered with patches of yellowish-olive. In this and some other species, males don’t get into full adult plumage until they're almost two years old—that first spring plumage may make older adult males a little more tolerant of adolescents, and may serve as a warning to females that these birds are probably too inexperienced to make ideal mates.

I don’t know why, but I always find it intriguing fun to research how birds get their names. Europeans first arriving in America didn’t study the words people living here for ages had already given the plants and animals—they had to come up with their own. The first white man to describe a great many plants and animals in the southeastern part of the continent, Mark Catesby, published his Natural History of Carolina, Florida, and the Bahama Islands in 1731-43. This was far and away the most important work about America’s bird life for a century until Audubon’s Birds of America appeared in 1827-38. Catesby named this the Summer Red-bird, distinguishing it from the Red-bird, which we call the cardinal, because the Summer Red-birds are, “birds of passage, leaving Virginia and Carolina in winter.” 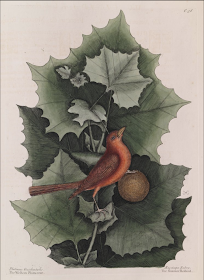 Catesby’s book was published before Linnaeus named it Piranga rubra in 1758. Audubon also called it the Summer Red Bird, but he applied the scientific name Tanagra aestiva when he painted it in 1821, ignoring Linnaeus’s scientific name for it. 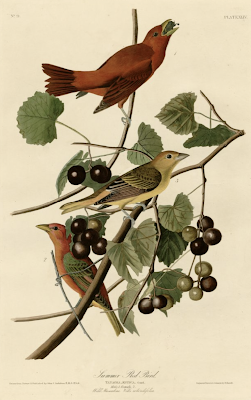 When the American Ornithologists’ Union created their first Checklist in 1886, they kept Linnaeus’s scientific name, and kept the word Summer in their official English name. But the AOU ignored the other part of both Catesby and Audubon’s name, red bird, naming this one the Summer Tanager and the other red bird the Cardinal. Ironically, although both species are still genuine red birds, the Summer Tanager is no longer considered a tanager. The AOU took it, along with the Scarlet and Western Tanager and a few other species, out of the true tanager family, which is a large family of Neotropical birds now placed at the very end of the checklist. The Summer Tanager now belongs to Cardinalidae, the cardinal family. I guess what goes around comes around.

I had to memorize all the avian orders and families back when I took ornithology, and I studied how the birds were organized in my first field guides even before that; since then, all kinds of changes have taken place. Sometimes now I have to think it through to find a bird on a checklist. That frustrates a lot of birders, but I find all the new discoveries researchers are making thrilling.

The Summer Tanager’s breeding range extends from the Gulf of Mexico into the southern half of Iowa and into northwestern Illinois, but not at all into Wisconsin or Minnesota. It winters from central Mexico to Bolivia and Brazil. Some male Summer Tanagers wander significantly north of their breeding grounds during spring migration, and both sexes wander during fall migration, though no one understands why; even more mystifying is the fact that individuals sometimes appear as far north as Canada during winter.

In 1975, during my first spring birding, I spotted a stunning adult male Summer Tanager along the Red Cedar River on the Michigan State University campus. The range maps of both my field guides showed it did not belong there, and so I never added it to my lifelist, though I can still picture the solid rosy-red bird perfectly. I had to wait until Russ and I went to Savannah, Georgia, a year later to add it to my list.

Even though I never counted that first one, from the moment I read about Summer Tanagers, I was intrigued. Their bill is noticeably longer than other tanagers, and apparently for a good reason—they specialize on eating bees and wasps. Their bee-eating habits are well-known—Audubon’s painting of this bird, from 1821, shows one bird with a bee in its beak. 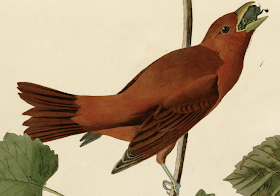 Alexander Wilson wrote in 1828, “In several instances I have found the stomach entirely filled with the broken remains of bumble bees.”

It’s a bit early up here for bees, and Summer Tanagers are perfectly fine eating fruits, some seeds, other insects, and even suet, but bees and wasps consider Summer Tanagers to be vicious serial killers with good reason. They snap big, juicy wasps in that bill, which is just long enough to keep any stinger safely away from their face. Then they bash the hapless insect against a branch to kill it, and then rub it against the branch to remove the stinger. After they’ve eliminated menacing adults, they raid colonies to eat the grubs. It’s labor-intensive and dangerous until each bird gets the knack, but a single large bee or wasp provides a lot more nourishment than most of the tinier insects other tanagers eat.

Summer Tanagers put on enough fat from their unique diet that when they were captured captured and weighed just arriving in Panama in one study, they still had more than enough fat to go over 500 additional miles! Most birds arriving there are depleted and need to pig out for at least a day or two before continuing. During spring, an out-of-the-way little wanderer may stick around a feeding station for days or even a week or two. Alison's little bird stuck around for a couple of days. It was last seen at noon Tuesday (May 15). He'll be missed, but with luck he's exploring this big wide world and will find his way back to where he belongs to figure out the lay of the land and where to stop next spring so he'll be successfully breeding when the time is ripe. 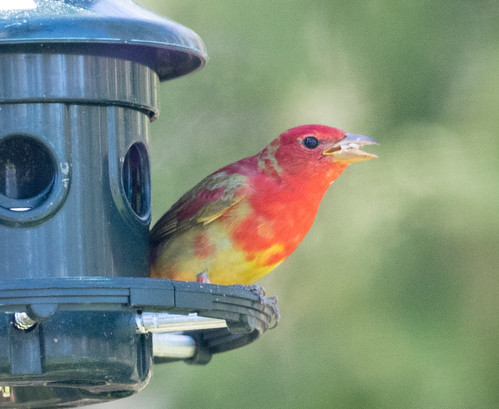