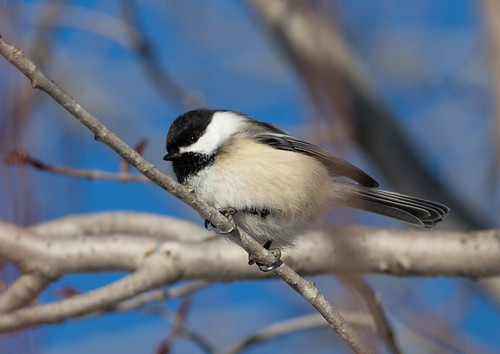 Something about the first brilliant blue-sky days of January always fills me with delight and hope. The vivid sky on January 6 was especially welcome this year—that was my first morning home from the hospital after another heart attack. I’m doing fine and should be back to my usual routine pretty soon, in part thanks to the Wisconsin Alumni Research Foundation, or WARF, which funded and patented the original research on a blood-clotting preventive named, naturally, warfarin. Although warfarin was originally used as a rat poison, it turns out to be an excellent blood-clotting preventative for people in my situation, with an aneurism on a coronary artery. Russ and I were already in WARF’s debt—they provided a research grant when he was working on his Ph.D. Meanwhile, I'm waiting for my blood levels to stabilize and can't take photos with my heavy camera for four weeks after my angiogram, so I’m thinking about these bright days of January.

Ever since the winter solstice on December 22, days have been getting longer, but it’s never noticeable at first, because right around both solstices, the day-to-day changes in daylength are measured in seconds, not minutes. The sun was setting at 4:20 pm here in Duluth from December 5 through the 17th. On the solstice, sunset was at 4:23, three minutes later than that. On January 9, it’ll set a quarter-hour later than that, at 4:39 pm.

To offset that pre-solstice gain in the afternoon, due to the sun’s angle and rotation, the sun doesn’t rise earlier until well after the solstice. On December 22, the sun rose at 7:50 am, but sunrise continued to get later, not earlier, for several days after that, and was still happening at 7:53 on January 6. Now, finally, sunrise is arriving earlier in the morning again—today it was at 7:52.

Right now, the change in daylength from one day to the next is about a minute and a half, but that will be increasing right up through the equinox. February first will be 2 minutes 44 seconds longer than January 31, and March first will be 3 minutes and 18 seconds longer than February 29. The earliest sunrises of the year will happen before the summer solstice, at 5:13 from June 12 through June 18. Of course, if there was no such thing as Daylight Saving Time, sunrise then would be at 4:13 am. And the latest sunsets will happen well after the summer solstice, with the latest sunsets at 9:06 from June 20 through June 30.

Whatever will happen in June, right now the sun is still not coming up until almost 8 am. The little kids waiting at the school bus stop on my corner are still standing out there in the dark. Chickadees aren’t singing that early, and even crows prefer to sleep in until it’s a little lighter.

To match the small number of hours in the day right now, birds are also at a minimum, in numbers of both species and individuals. My backyard birds are few and far between this year—as of January 8, I’ve only seen chickadees, pigeons, crows, and Downy Woodpeckers in my yard. Of course, I did spend three of those days in the hospital (where I added Herring Gull to my year list), and am not up to speed with birding quite yet, but I’ve had plenty of time to look out the window and wonder where my Pileated Woodpeckers are, or what happened to the Red-bellied Woodpecker who was here on December 31. Other people have been letting me know that their birds are scarcer than usual this year, too. But it’s probably not smart of me to brood about that quite yet. Until I’m a little further along on my recovery, I’m spending my time looking at my chickadees and counting minutes, literally. As our days are finally getting noticeably longer, I’m putting my focus on the lovely times ahead.